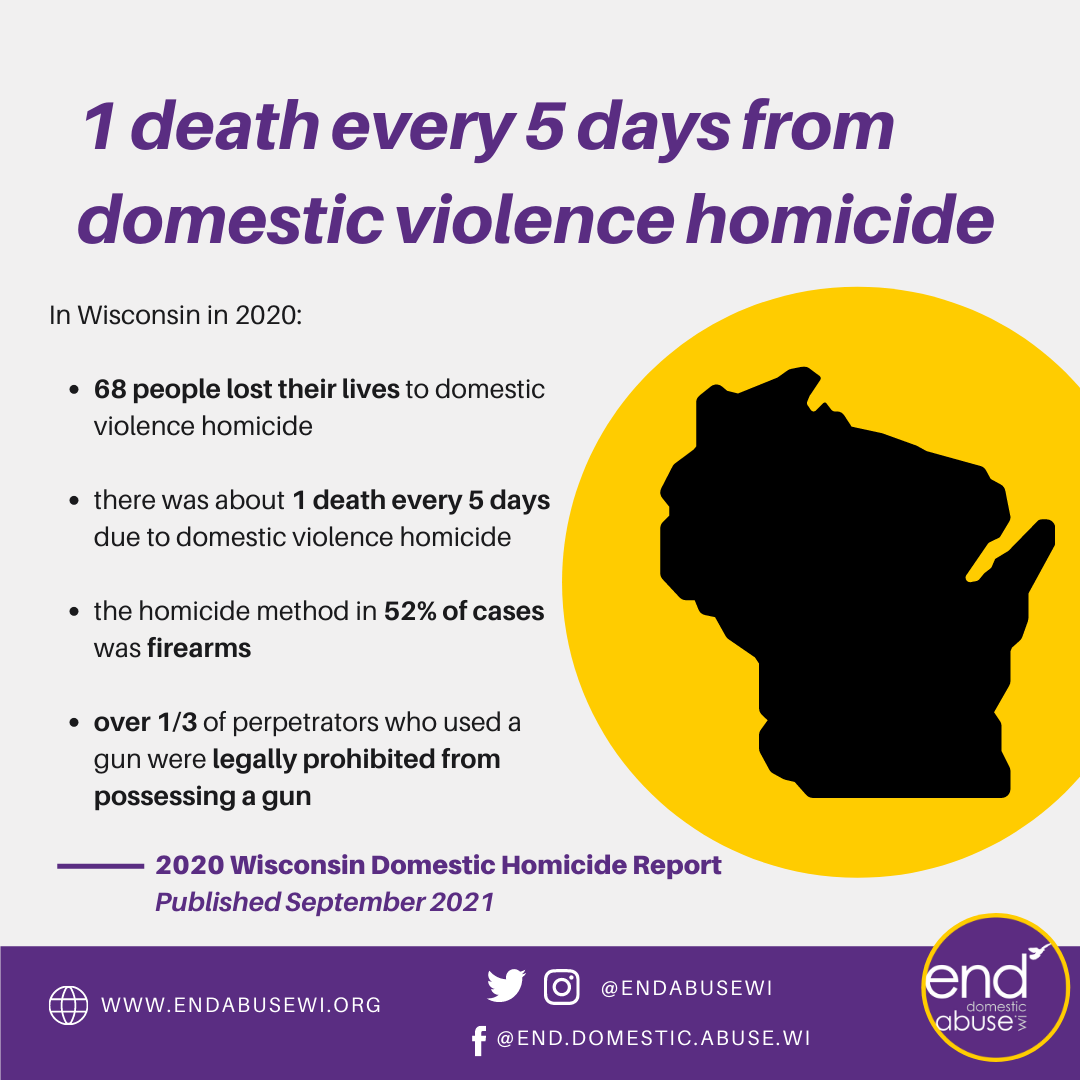 Between October 14-21, it appears that at least nine people died and two were injured from domestic violence homicide related incidents in Wisconsin. In all cases, which are still under investigation and occurred in Milwaukee, Kenosha, and Green Bay during Domestic Violence Awareness Month, firearms were the weapon used to perpetrate violence.

“While details are still being determined in these cases, what we see in all these incidents is consistent with what we know about predictable patterns in domestic violence homicide based on 21 years of Wisconsin data collection,” said End Domestic Abuse Wisconsin Homicide (End Abuse) Prevention Program Director Sara Krall. “In all cases, we see both firearm use and perpetrator suicide. In at least one case, the apparent perpetrator was prohibited from possessing the firearm used to enact violence.”

According to End Abuse’s 2020 WI Domestic Violence Homicide Report released in September, there was about one death every five days from domestic violence homicide in 2020. Consistent with past data, the homicide method in 52% of cases was firearms, and over 1/3 of perpetrators who used a gun were legally prohibited from possessing a firearm. National trends reflect similar findings; according to the Brady Center to Prevent Gun Violence, every 16 hours in the US, a woman is fatally shot by a current or former intimate partner, and 65 percent of murder-suicide incidents nationally involve an intimate partner. 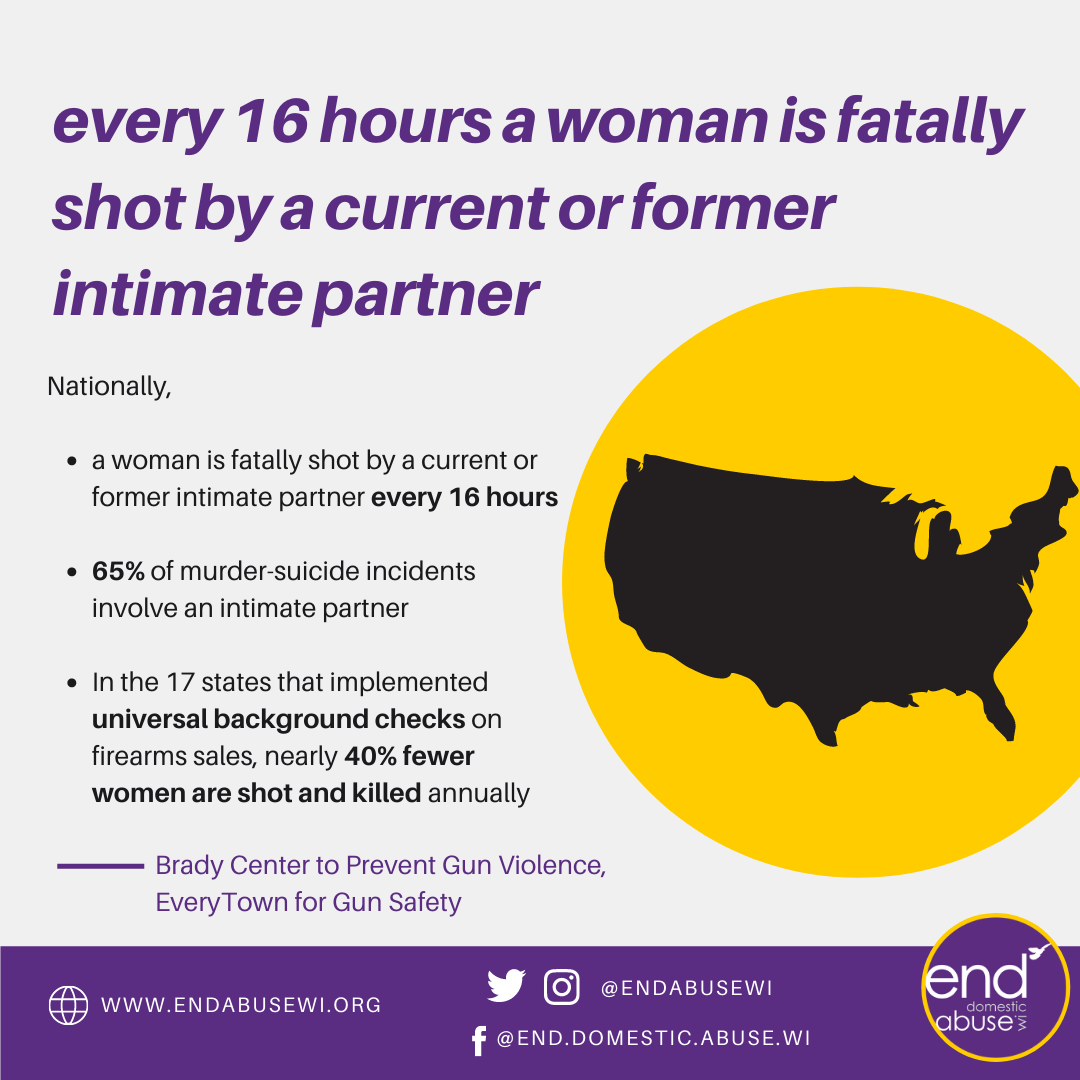 “We urge the legislature to address domestic violence homicide by passing critical bills,” said End Abuse Director of Public Policy & Systems Change Jenna Gormal. “None of these bills are radical; they keep guns out of the hands of those convicted of certain domestic violence-related misdemeanor offenses and address loopholes that give abusers access to deadly weapons by requiring universal background checks (UBCs) on firearms sales. In the 17 states that implemented UBCs, nearly 40% fewer women are shot and killed annually.”

“Finally,” said Gormal, “the high number of perpetrator suicide cases this month highlight the need for extreme risk protection orders (ERPOs), which allow family members and law enforcement to petition to temporarily prevent an individual from possessing a firearm when they are at risk of harming themselves or others. ERPOs give domestic violence survivors who may be afraid to obtain a restraining order themselves, an option to access safety. These lifesaving bills exist, and we need the legislature to take action on them now.”

In addition to public policy, End Abuse addresses this crisis by focusing on safety via areas like prevention and housing. 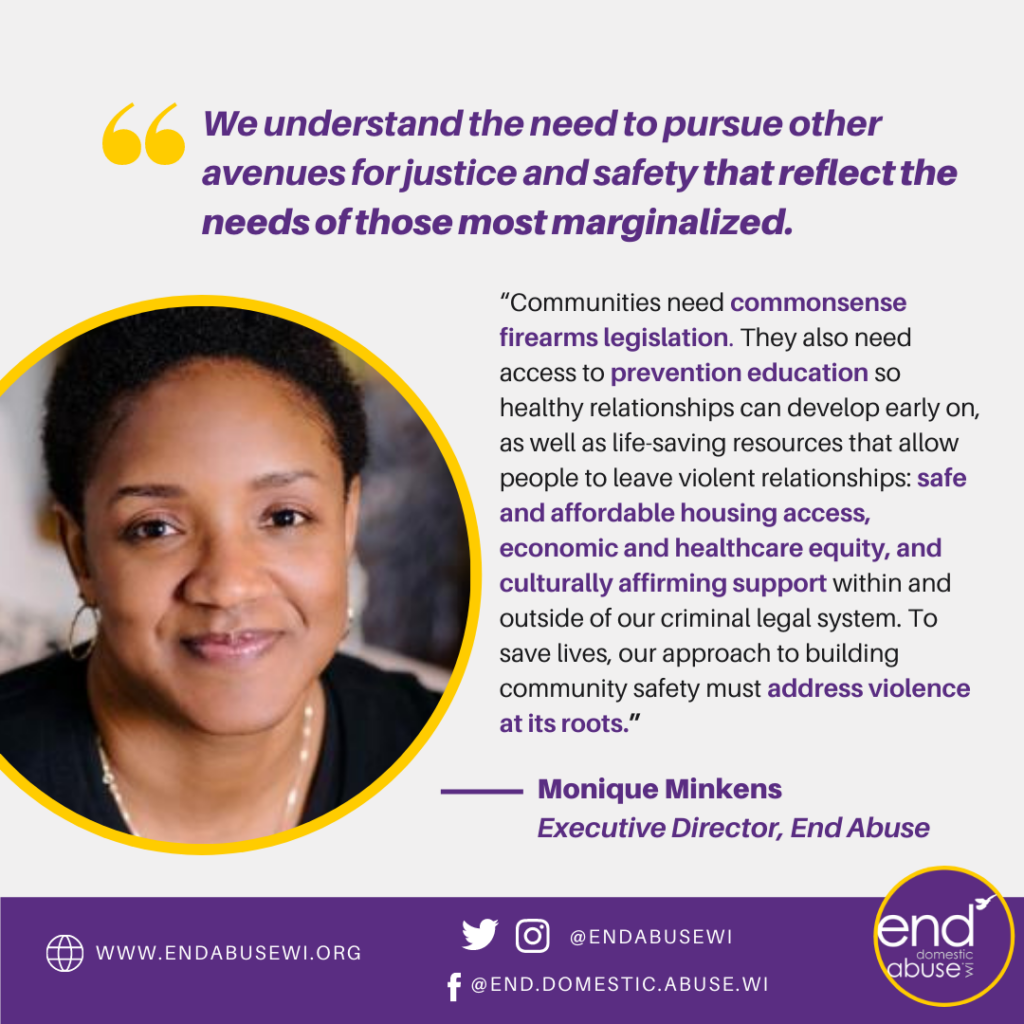 “We understand the need to pursue other avenues for justice and safety that reflect the needs of those most marginalized,” said Minkens. “Communities need commonsense firearms legislation. They also need access to prevention education so healthy relationships can develop early on, as well as life-saving resources that allow people to leave violent relationships: safe and affordable housing access, economic and healthcare equity, and culturally affirming support within and outside of our criminal legal system. To save lives, our approach to building community safety must address violence at its roots.”

During Domestic Violence Awareness Month, End Abuse announced a new monthly, virtual support group for people who have lost someone close to them due to domestic violence homicide. For details, visit https://bit.ly/dvhomsupport21 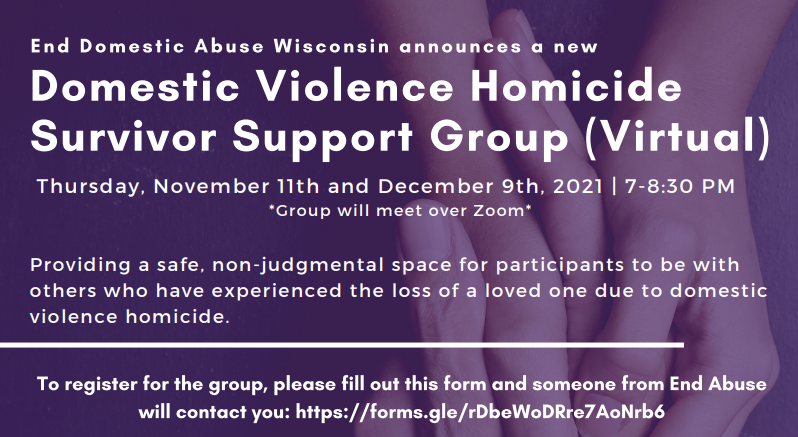