End Abuse is the statewide voice for domestic abuse survivors and advocates. We seek to raise our voice in the halls of the 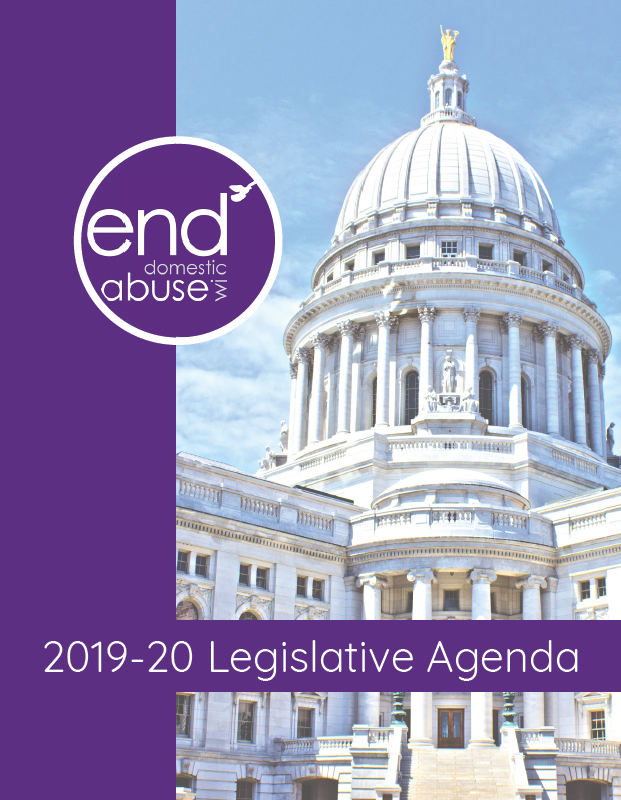 State Capitol in Madison, so that laws and polices work to make Wisconsin a more peaceful and just place.

Every two years, End Abuse releases our legislative agenda, which summarizes our priorities for proactive policy and social change to end domestic abuse in Wisconsin. For 2019 to 2020, we are calling on policymakers to address the the following topics:

We are grateful to the survivors, advocates, member organizations, and other partners who have guided the creation of the Agenda through our public policy committee, at our civic engagement trainings, and in other discussions and meetings. The voices of many are reflected and united in our common purpose.

So often in policy discussions, how we define the problem can limit how we envision solutions. Therefore, in our Legislative Agenda, we sought to clearly express the current gaps and failures and articulate a bold, yet achievable, vision for how Wisconsin can be a safer place for us all, and especially for the most vulnerable in our communities.

We will use the agenda as a guide in our discussions and meetings with legislators and other officials. We invite you to read the agenda and get connected to our public policy work by reaching out to End Abuse and by signing up for our Action Alerts . 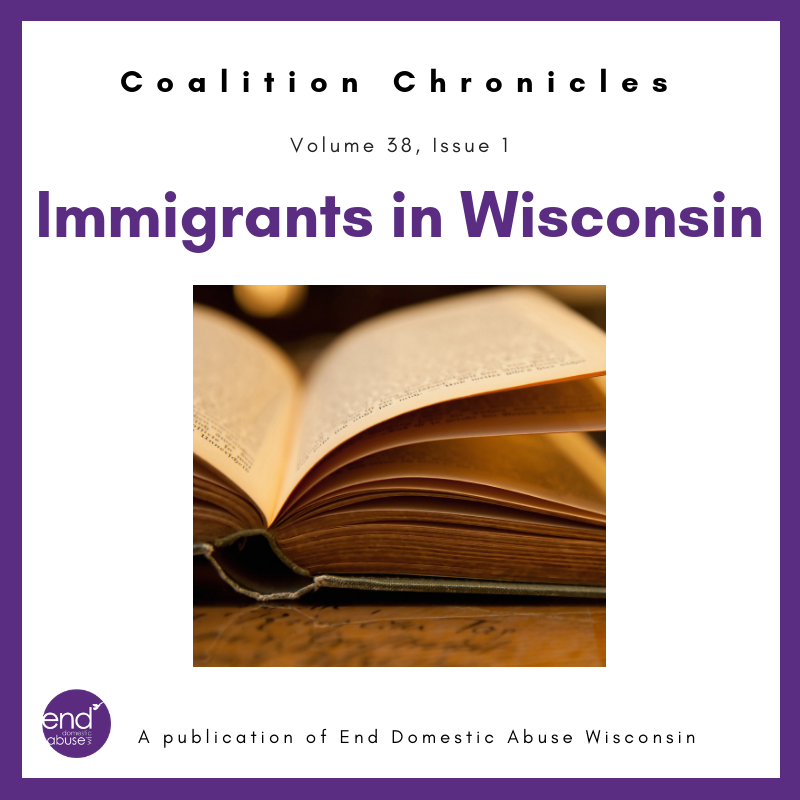 End Abuse works to bring domestic abuse advocates in Wisconsin current and relevant information they can use to better serve survivors in their day-to-day work.

One way we do this is by producing Coalition Chronicles , which is an educational periodical specifically for direct service providers. Coalition Chronicles focuses on a unique topic each issue. It consists of original content and excerpts of and links to cutting edge content from across the movement.

The latest edition of the Chronicles discusses the many ways that immigration intersects with abuse and healing. A quote from Araceli Wence, a bilingual advocate and counselor at New Beginnings APFV in Whitewater, describes the perilous situation in which many immigrant survivors find themselves; she also points to the unique challenges of providing safe and accessible services to immigrant members of our communities:

“Imagine you are an undocumented immigrant who is experiencing abuse. Would you reach out to an organization that, in your eyes, might have ties to the government? Would you trust sharing your personal information with someone you have never seen? Maybe our answer would be no, not ever, if we put ourselves in the shoes of the thousands of immigrant people who live in our counties. People who are experiencing abuse and living in a new country may need twice as much help as someone who is not an immigrant.

It was hard enough to have these disadvantages as immigrants in years past; currently the political climate and all the controversy surrounding immigration is making the lives of immigrant people worse. It seems that people with power have given permission to others to behave in openly racist ways.”

The Chronicles includes articles on the numerous ways End Abuse and its members work to mitigate these barriers, including through our law center for immigrant survivors, supporting bilingual advocates working across Wisconsin, working towards better language access, and supporting immigrant friendly public policies, such as drivers’ cards.

Check out this and previous editions of Coalition Chronicles on our website.

Twice a year, End Domestic Abuse Wisconsin and our sister coalitions bring together the directors of all the local domestic abuse and sexual assault programs in the state. At the Directors’ Meeting this month, we took time to pay tribute to Diane Wolff. Diane will be retiring from End Abuse in June.

The time spent honoring Diane at the Directors’ Meeting made very clear the unique place she has in the Wisconsin domestic violence movement. Spontaneously, each person in attendance shared ways in which Diane had touched their lives. Leaders of local programs said Diane was the person they called when they needed advice, or just someone to listen. Many directors offered that Diane has been their mentor, the person they try to model themselves after, “the person they want to be when they grow up.” People spoke movingly and genuinely about how Diane impacted the course of their careers and how they knew Diane had positively impacted the lives of countless survivors across Wisconsin. When one considers that dozens of leaders of domestic abuse programs throughout Wisconsin said they looked to Diane as a guiding light, the full measure of the difference she has made starts to become apparent.

The trusting, supportive relationships Diane has built with advocates and directors have nurtured the high-quality, trauma-informed services for survivors in our state. The cumulative efforts of Diane’s 30-year career has left Wisconsin’s domestic abuse programs – and the survivors they serve – in a better place.

At End Abuse, we will be supported by Diane’s legacy for many years to come. Her commitment to victim-centered work, to deep listening, and to being an advocate for advocates is embedded in our organization. While she cannot be replaced, her wisdom will carry our work forward.

The Asha Project Welcomes Advocates from Central and South America 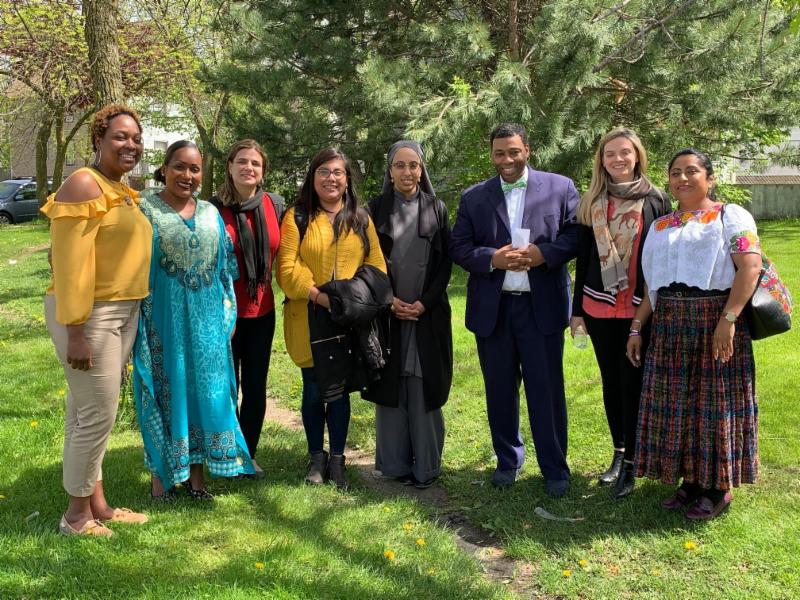 The Asha Project operates under the umbrella of End Domestic Abuse WI. This partnership sustains Asha’s provision of culturally-specific services to victims of domestic abuse, human trafficking, and sexual abuse from African American communities in Milwaukee.

The Asha Project recently welcomed and hosted a number of visitors from Central and South America through the US State Department and The International Visitor Leadership Progra m. The topic of the exchange was “Women as Drivers of Social and Economic Change.” Through the use of an interpreter, Asha staff were able to share how they work within a culturally-specific framework to meet the needs of African-American survivors. The guests shared how they work to effect change in their individual countries. According to all involved, it was a beautiful, successful dialogue.

Follow the Asha Project on Facebook to learn more about Asha’s transformative work within the African-American community in Milwaukee.