“When Rae Elaine Tourtillott went missing, the hole she left behind was immeasurable.

‘It was so painful, not knowing where she was, if she was out somewhere alone. She was so smart and so strong. For months, I prayed she had just been taken – that she would find a way to escape and come back home.'”

-excerpted from They Trespass Her Body Like They Trespass This Land*: Justice, Remembrance, & Healing for Missing and Murdered Indigenous Peoples 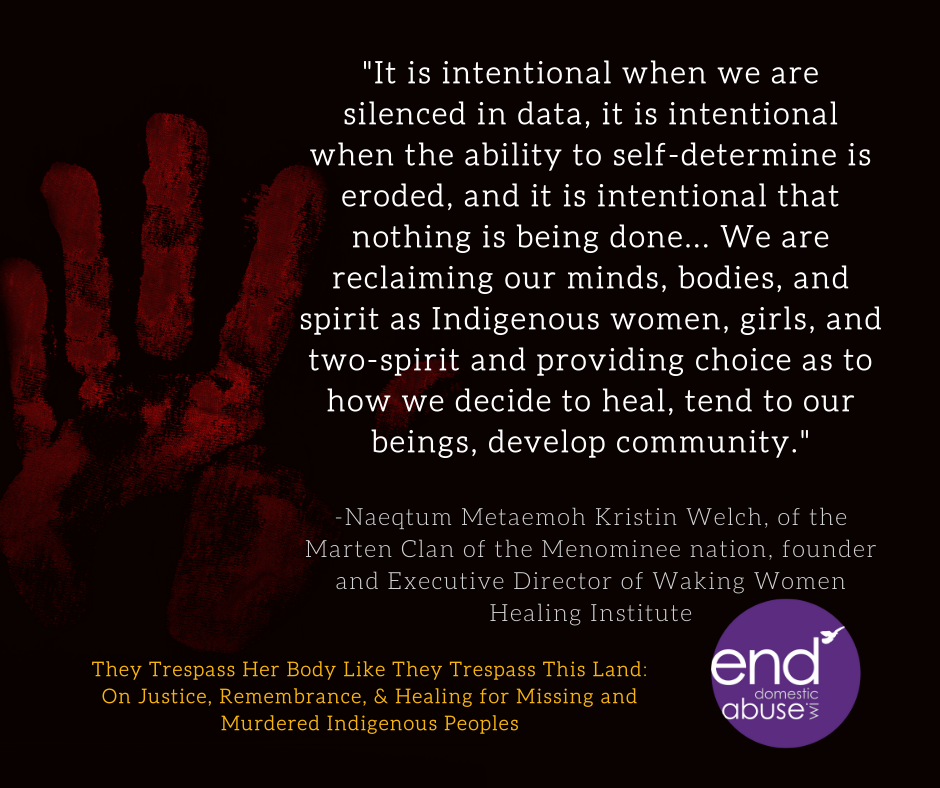 In their lifetime, 84% of American Indian and Alaskan Native women experience violence, with homicide being the third leading cause of death. No reliable data exists on the actual number of MMIWG2S, though it is certain that instances of violence continue to be directed against Indigenous women at high rates.

In September 2021, End Abuse Systems Change Coordinator Tegan Swanson, in close collaboration with Native families and members of the WI MMIW Task Force, authored a featured piece titled They Trespass Her Body Like They Trespass This Land*: Justice, Remembrance, & Healing for Missing and Murdered Indigenous Peoples. Released simultaneously with the 2020 Wisconsin Domestic Violence Homicide Report, this in-depth piece highlights the crisis of Missing and Murdered Indigenous Women, Girls, and Two-Spirit (MMIWG2S) people in an effort to amplify the work of Native communities to meaningfully address the harrowing past and current systemic violence against and attempted erasure of Indigenous bodies, cultures, and experiences. 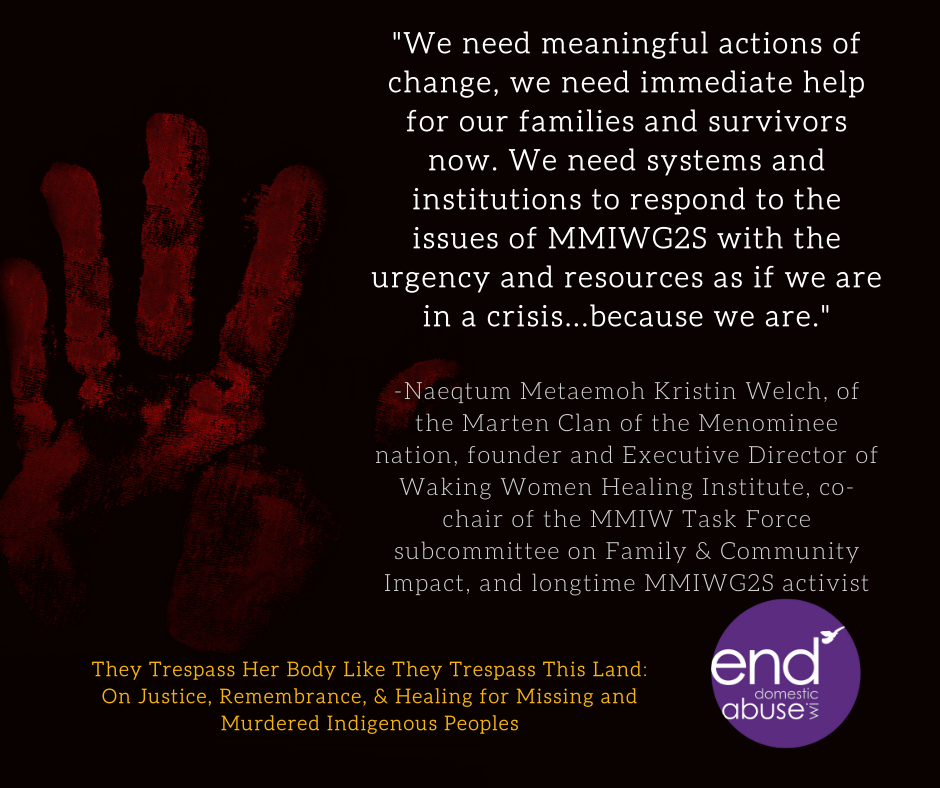 It is essential to acknowledge and express deep gratitude to all who enabled this piece to exist.

to the Missing and Murdered Women, Girls, Two Spirit and other relatives, named and unnamed. You are not forgotten.

to the families, those who offer their time and their stories, and those who choose to keep their energy and their grief private.
to Alysse Arce, Andy Lemke-Rochon, and the Tourtillott family especially, for sharing your hearts and your memories of Rae Elaine with me.

to the twelve Indigenous nations of Wisconsin: 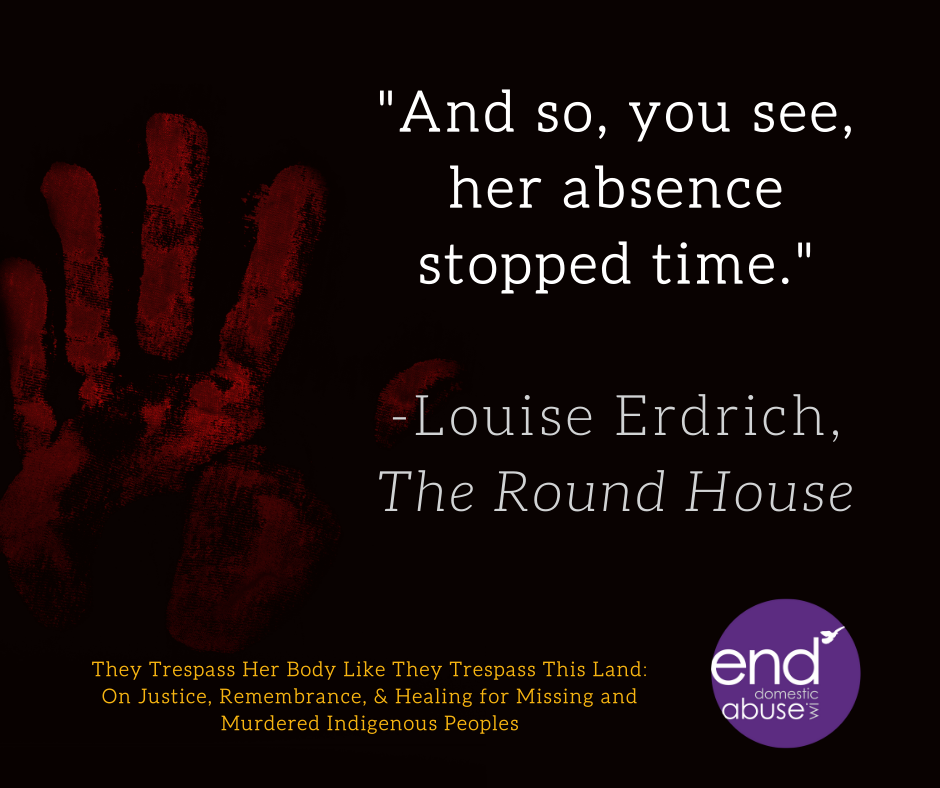 to the Missing and Murdered Indigenous Women (MMIW) Task Force membership for your guidance, your grace, your passion, your trust. Especially:

to Justine Rufus, tribal member of the Bad River Band of Lake Superior Chippewa, resident of Red Cliff, co-chair of the MMIW Task Force, trusted colleague and friend at WCASA

to Naeqtum Metaemoh Kristin Welch, of the Marten Clan of the Menominee nation, founder and Executive Director of Waking Women Healing Institute, co-chair of the MMIW Task Force Subcommittee on Family & Community Impact

to Namāēwkūkiw Rachel Fernandez, Sturgeon Woman of the Menominee nation, founder and Executive Director of Maeqtekuahkihkiw Metaemohsak Woodland Women, co-chair of the Data Subcommittee for the MMIW Task Force

to Beezh Ka Nook Dr. Renee Gralewicz, (Cattail, guardian of the shore), a descendant of the Stockbridge-Munsee Band of Mohicans and an enrolled member of the Brothertown Nation. Her work as an anthropologist and in Indigenous studies highlighted the continuous inequities caused by colonialism and extreme patriarchy. After retiring with 23 years within the UW System, she now dedicates more energies to combat some of the genocidal effects of colonialism like the MMIWG2S pandemic. She currently works with the WI DOJ MMIW Task Force as co-chair of the Legal/Policy Subcommittee, and with Waking Women Healing Institute, Inc.

to the Hon. Gwendolyn Topping, Red Cliff Band of Lake Superior Chippewa, Associate Judge of the Wisconsin Tribal Judges Association, and co-chair of the Legal/Policy Subcommittee for the MMIW Task Force

to Rene Ann Goodrich, MMIW family member and tribal member of the Bad River Band of Lake Superior Chippewa, co-chair of the Community and Family Impact Subcommittee of the MMIW Task Force, elder and leader at Native Lives Matter Coalition

to the Indigenous women and Two-Spirit relatives who lead anti-violence advocacy everywhere, including End Abuse’s own Stephanie Ortiz, Director of Prevention and Outreach

to Layli Long Soldier for her brilliant and subversive text Whereas, which you might recognize in glimmers of the structure of this essay

to the 1491s, for the piece from which the title and the ethic of this essay is rooted, to the Indigenous Woman; and for your insistence (as a group and as individuals) that we can make change in most any realm of art, comedy, social, or environmental justice with a little bit of creative story-telling.

to the poet Angie Trudell-Vasquez, who we are so lucky to share space with at End Abuse.

to Mikayla Sandin, advocate, systems leader, and artist, for your contributions of gratitude and remembrance

to the Wisconsin Dept. of Justice and especially Shira Phelps, for supporting End Domestic Abuse Wisconsin’s efforts to advocate for MMIW issues

and finally, to Cleveland “CJ” Doxtater, He Picks Up The Snow, adopted by the Wolf Clan, born to the Bear Clan Oneida Nation of the Iroquois Confederacy and a Hunka of the Cante Ohitaka Tiospaye. You welcomed me into this work, and your gentle heart and guiding spirit are ever-present.

*from the 1491s’ To the Indigenous Woman