In 1995, End Domestic Abuse Wisconsin (then the “Wisconsin Coalition Against Domestic Violence” hired its first staff attorney. At that time, having a dedicated attorney to provide training and information on domestic violence law and policy to advocates around the state was a big deal.

Tess Meuer was first person to occupy that important position. Tess is still in that position, and she still is a big deal.

This October, Domestic Violence Awareness Month, End Domestic Abuse Wisconsin will wish Tess a happy retirement and thank her for a job well done. Tess has reduced her hours at End Abuse and will be finishing a few trainings through the end of year before she fully starts the next phase of her life.

Tess has increased awareness of domestic abuse within all facets of the legal system through her exemplary lectures and presentations. Tess is an accomplished teacher who has provided countless trainings to a wide range of audiences including domestic violence advocates, attorneys, judges, clerks, probation officers, and law enforcement. Tess also developed and taught courses on domestic violence at the University of Wisconsin Law School and Marquette University Law School. During her 20-year teaching career at Wisconsin’s law schools, Tess has influenced hundreds of students who are now practicing attorneys, prosecutors, and judges. Tess has also mentored numerous legal interns at End Domestic Abuse Wisconsin, many of whom go on to help survivors of domestic abuse throughout their careers. In recognition of her academic teaching, Tess was named the Warren H. Stolper Adjunct of the Year Award in 2016 by the University of Wisconsin Law School Alumni Association and Board of Visitors for her wide array of legal work pertaining to domestic violence.

In addition to training, Tess works with domestic violence programs, as well as other agencies and individuals in the legal system, to answer questions and improve organizations’ responses to domestic violence cases. Tess is frequently asked to serve on committees and assist organizations with published materials because of her vast knowledge and expertise in the area of domestic abuse. For example, she is a member of the Director of State Courts Office’s STOP Grant Advisory Committee and has frequently consulted with the Records Management Forms Committee on issues related to the restraining order forms. Additionally, Tess is the author of a chapter entitled Domestic Abuse published by the State Bar of Wisconsin in their Lawyer’s Desk Reference since 1997.

Tess is also deeply passionate about improving the lives of children who live in homes where there is domestic abuse. For the past few years, Tess has dedicated her time and energy on improving the family law system’s response to domestic abuse cases. Tess was instrumental in working with the Governor’s Council on Domestic Abuse to develop the Domestic Abuse Guidebook for Wisconsin Guardians ad Litem: Addressing Custody, Placement, and Safety Issues. Since the guidebook has been completed, Tess has provided numerous trainings and presented to hundreds of advocates, family attorneys, guardians ad litem, and judges on the handbook and how the family law system can better account for the safety and well-being of non-abusive parents and children. Through these trainings, Tess has combined her knowledge of the law and best practice with her firsthand accounts of growing up in an abusive home to stir the hearts and minds of judges and other legal professionals. A number of attendees have said that Tess has allowed them to see the issue and impact of domestic abuse in a completely different light.

Even more difficult than saying farewell to all of Tess’s talents, we will miss Tess as a coworker and friend. Anyone who knows Tess can attest that she is one of the most genuine, thoughtful, and compassionate people they have ever met. Despite being dedicated to her work, she is also a fiercely loyal friend and family member, often going above and beyond to make sure those in her life are cared for and supported. Tess exudes kindness and positivity and is truly someone who makes the world a better place. 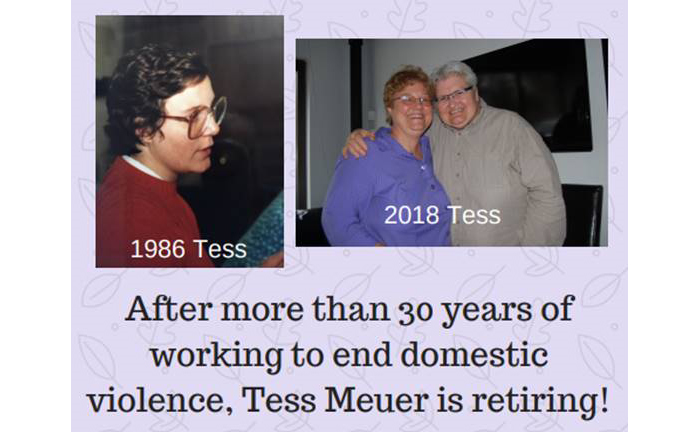